According to the American Academy of Dermatology (AAD), acne is the most common skin disorder, and it affects up to 50 million people in the United States each year. Most people develop acne symptoms as teenagers, but it can also develop in adulthood. The AAD estimates that 85% of people between the ages of 12 and 24 have at least minor acne.

What is acne? It is an inflammatory skin condition that affects the skin’s hair follicles and oil glands. The symptoms you develop depend on the type of acne you have, and it can form on many areas of the body, including your face, neck, chest, back, and shoulders. 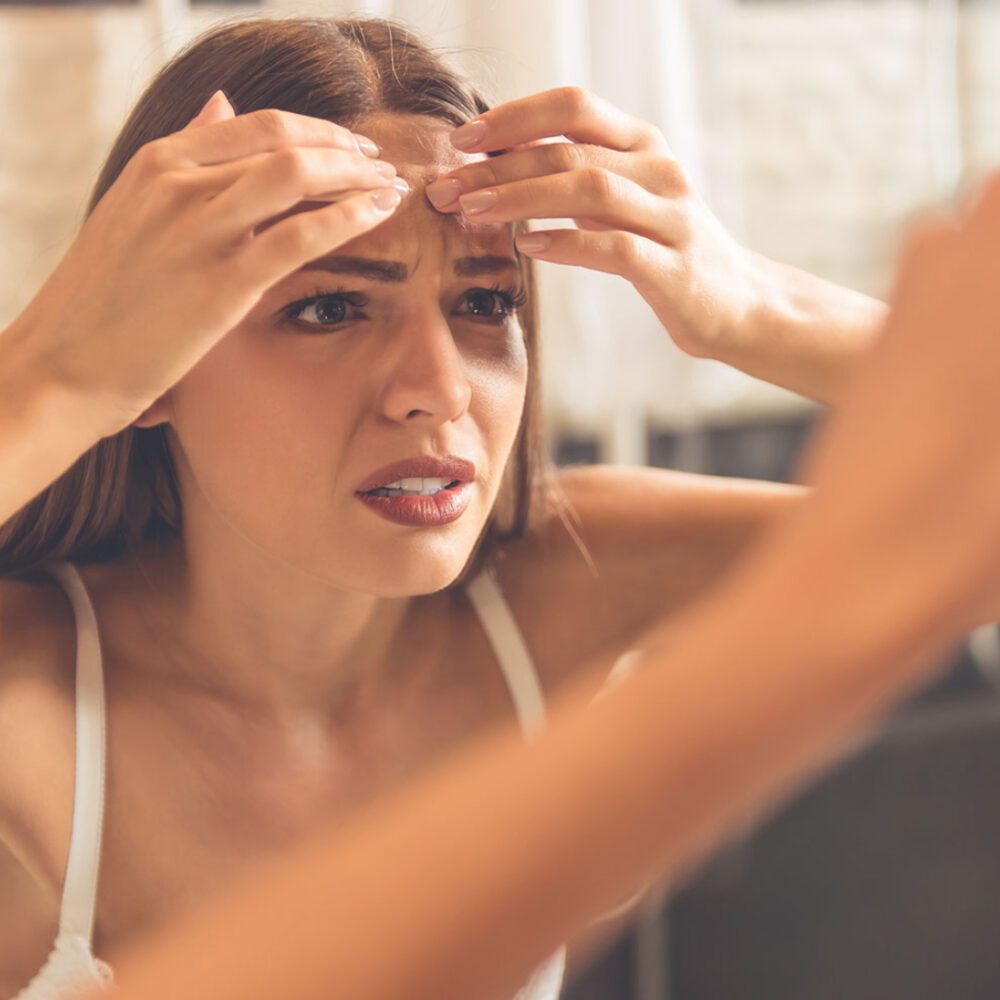 What Are the Types of Acne?

Whiteheads: Whiteheads are also called closed comedones, and they form when pores are clogged by dead skin cells and oil. They’re closed at the surface of the skin and appear as a small white bump. Since whiteheads can’t be removed by squeezing them, you shouldn’t try to pop them. Trying to squeeze a whitehead can damage your skin, possibly leading to scarring.

Blackheads: Blackheads are known as open comedones because the top of the pore stays open. Since the rest of the pore is clogged, blackheads appear as small black dots at the surface of the skin. Just like whiteheads, blackheads develop when pores are clogged with oil and dead skin cells. Although you can remove a blackhead by squeezing it, this isn’t recommended by dermatologists because it can cause scarring.

Papules: Papules appear as small red bumps on the skin that are very tender to the touch. They occur when comedones become inflamed and bacteria, oil, and dead skin cells get trapped under the surface of the skin. It’s common for papules to cluster together, creating an appearance that looks similar to a rash. You should never try to squeeze papules because it can worsen the inflammation and cause scarring.

Pustules: Pustules are very similar in appearance to papules, but the primary difference between the two is that pustules contain pus. This results in a bulging bump at the surface of the skin that is white or yellow in appearance. Only your dermatologist can drain pustules. Attempting to squeeze pustules can lead to dark spots on the skin and cause the bacteria to spread.

Nodules: Nodules develop deep within the skin and are usually quite painful. They appear as large, hard bumps that feel firm when you touch them. Nodules form when bacteria travel deep into the pore and cause an infection.

Cysts: Cysts are considered severe acne, and they appear as large, red lesions that are filled with pus. Cysts are similar in appearance to boils and are often very painful. They develop when there is an infection deep under the skin, and they also have the largest risk of permanent scarring compared with other types of acne.

How Is Acne Treated?

Acne treatment depends on the type and severity of acne. If you have whiteheads or blackheads, your dermatologist may recommend products containing salicylic acid or topical retinoids. These ingredients work by exfoliating the skin and removing dead skin cells. If you have multiple whiteheads, you can also use an acne spot treatment containing benzoyl peroxide.

Dermassociates may recommend products containing benzoyl peroxide or salicylic acid for acne treatment. These products are applied to your face or designed for acne spot treatment. Products with these ingredients can treat existing acne and prevent new blemishes.For larger pustules and papules, your dermatologist will likely prescribe an acne medication, such as an oral antibiotic, to treat bacteria and soothe inflammation.

If you have acne on other parts of your body, such as your back, chest, or neck, products containing benzoyl peroxide can be an effective treatment. For severe acne, such as nodules and cysts, you will need to see a dermatologist and may be prescribed isotretinoin, an oral retinoid that inhibits the growth of bacteria, reduces oil production, and soothes inflamed skin.

Since hormones also play a role in the development of acne, especially for women, your doctor may prescribe birth control pills to control and treat acne. Research has shown that birth control pills are just as effective as oral antibiotics for treating acne in women. Dermassociates can help with your acne and other skin conditions.